This trip was to celebrate our 40th wedding anniversary and the last two nights are our special treat. Rather than the usual 2 star to 3 star hotels, we are in the centre of downtown KL in a 5 star. A nice luxury for a couple of nights. And luxury it is. The bathroom is bigger than many hotels we have stayed in. Seriously! 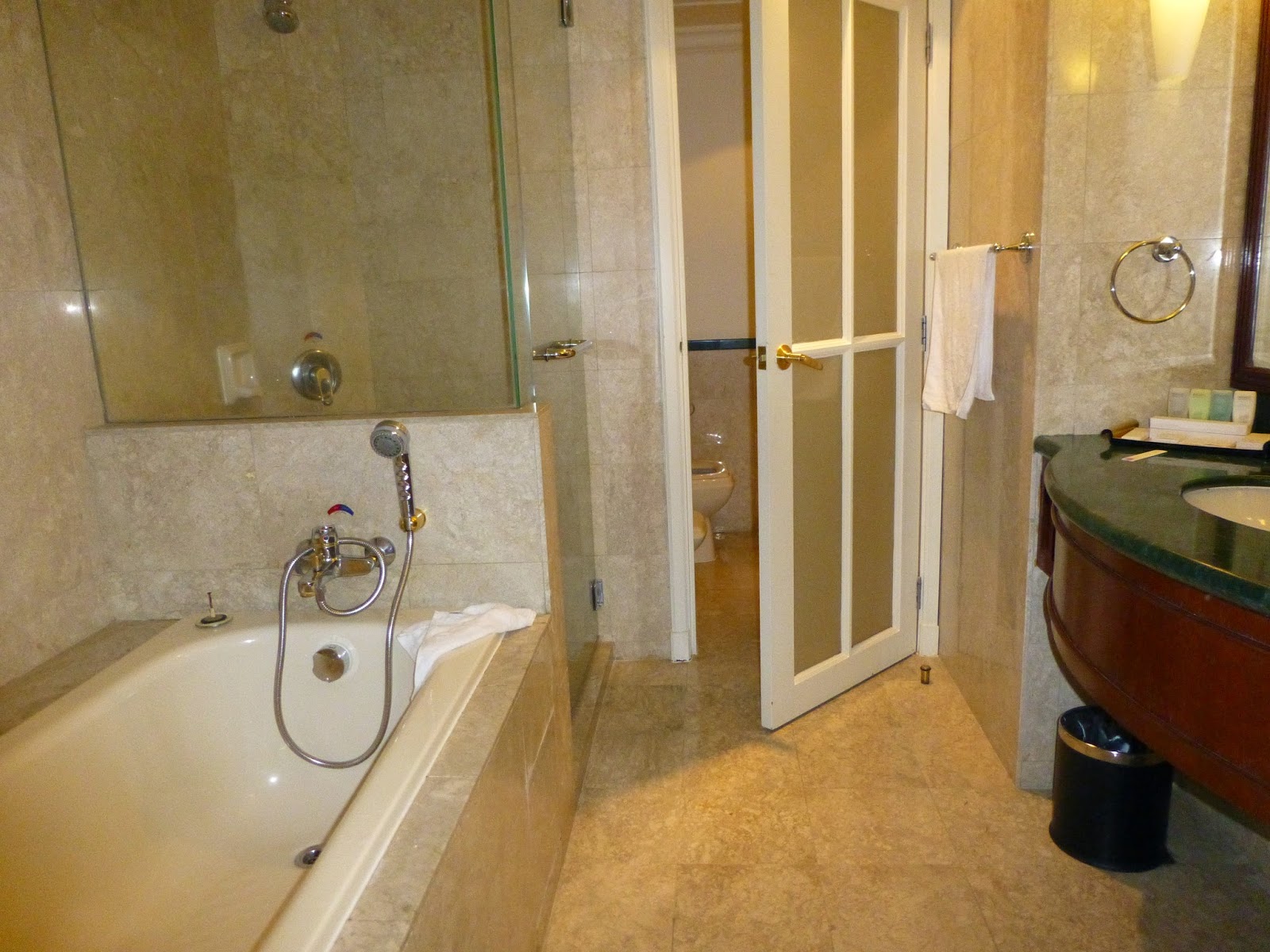 Our last night in Langkawi was spoilt to some degree by the couple in the room next door. Last night they had played music on full volume early in the evening, yelled and screamed at visitors to their room, then started up again at 1:00am for an hour. We let it go, but when they started up again this afternoon we told the front desk and Security were sent to ask them to turn it down. There was a bit of yelling and when Security left, the guy tried to get into our room via the adjoining door. We naturally made a fairly loud objection to this and to their credit, Security quickly returned and we demanded, and were given, another room, away from the crazies!
After a great night’s sleep, we made our way to the airport at a very civilized hour and, after a bit of a delay, headed off to KL.
We really like Langkawi - it didn’t feel crowded or overly touristy. The beach wasn’t crowded, the traffic sedate and the lifestyle very laid-back. Duty free shopping is touted as the big attraction on Langkawi, but we felt, with the exception of alcohol, prices in the duty free shops were no better than at home. Eating options were many, varied and reasonably priced at around $25-$30 for a meal for two, including a couple of beers. Best of all, there was a lot to see and do on the island.

Our 40th wedding anniversary was yesterday. We had booked ourselves a 10:15am tour of the Petronas Towers as part of our celebration, thinking that even with a leisurely breakfast at our central city hotel, the Berjaya Times Square, we would have plenty of time to jump on the monorail and make it in time to collect our tickets at the prescribed time of 9:45. Just back from a trip through China and Europe, we were used to trains arriving every few minutes. Well, not on Sunday in KL! Panic set in when we noted the 25 minutes wait time for the next monorail train, and we had to then make a connection to the light rail line to get to the Towers. Ditching the trains, we grabbed a cab and made it in the nick of time. 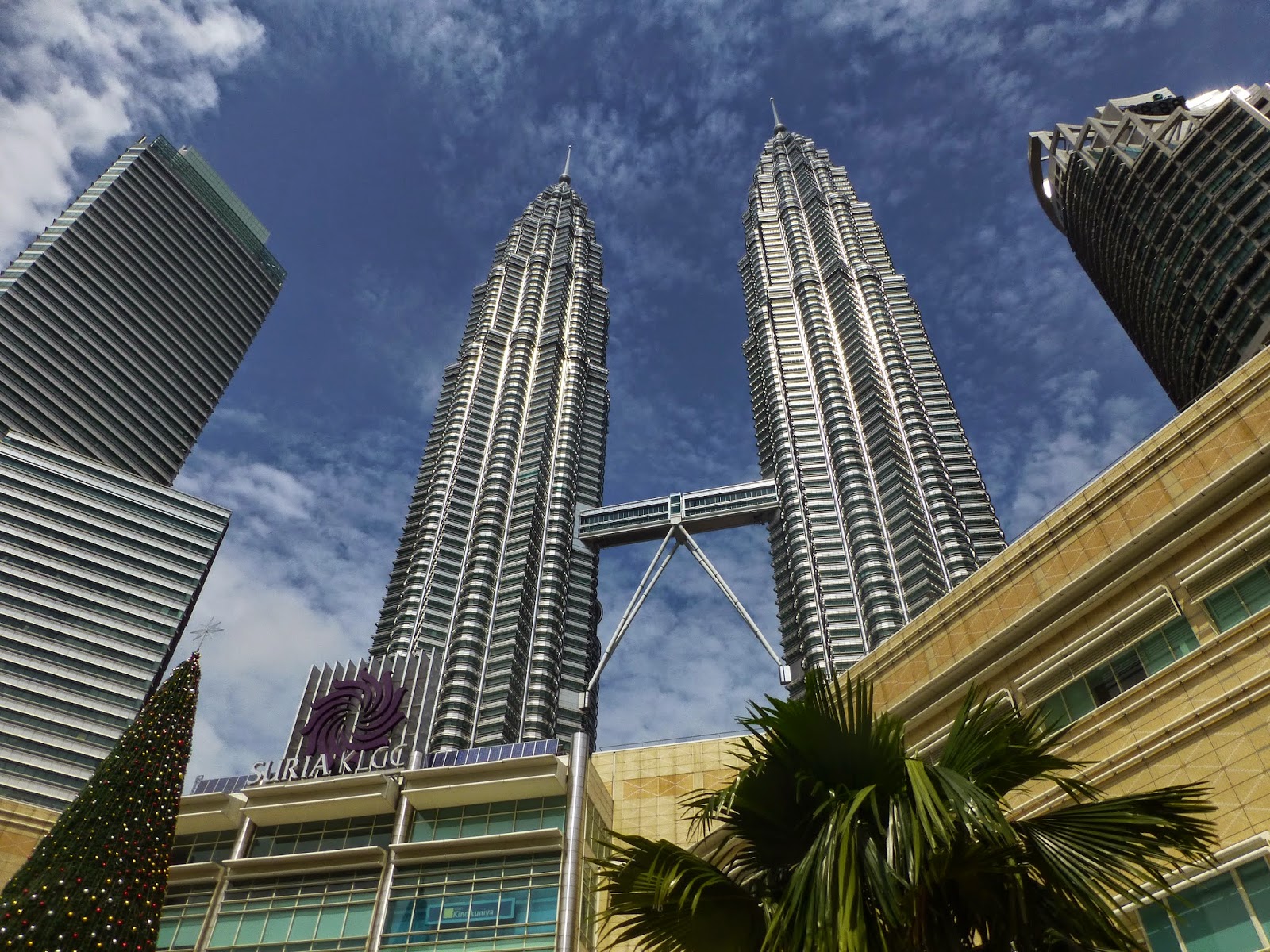 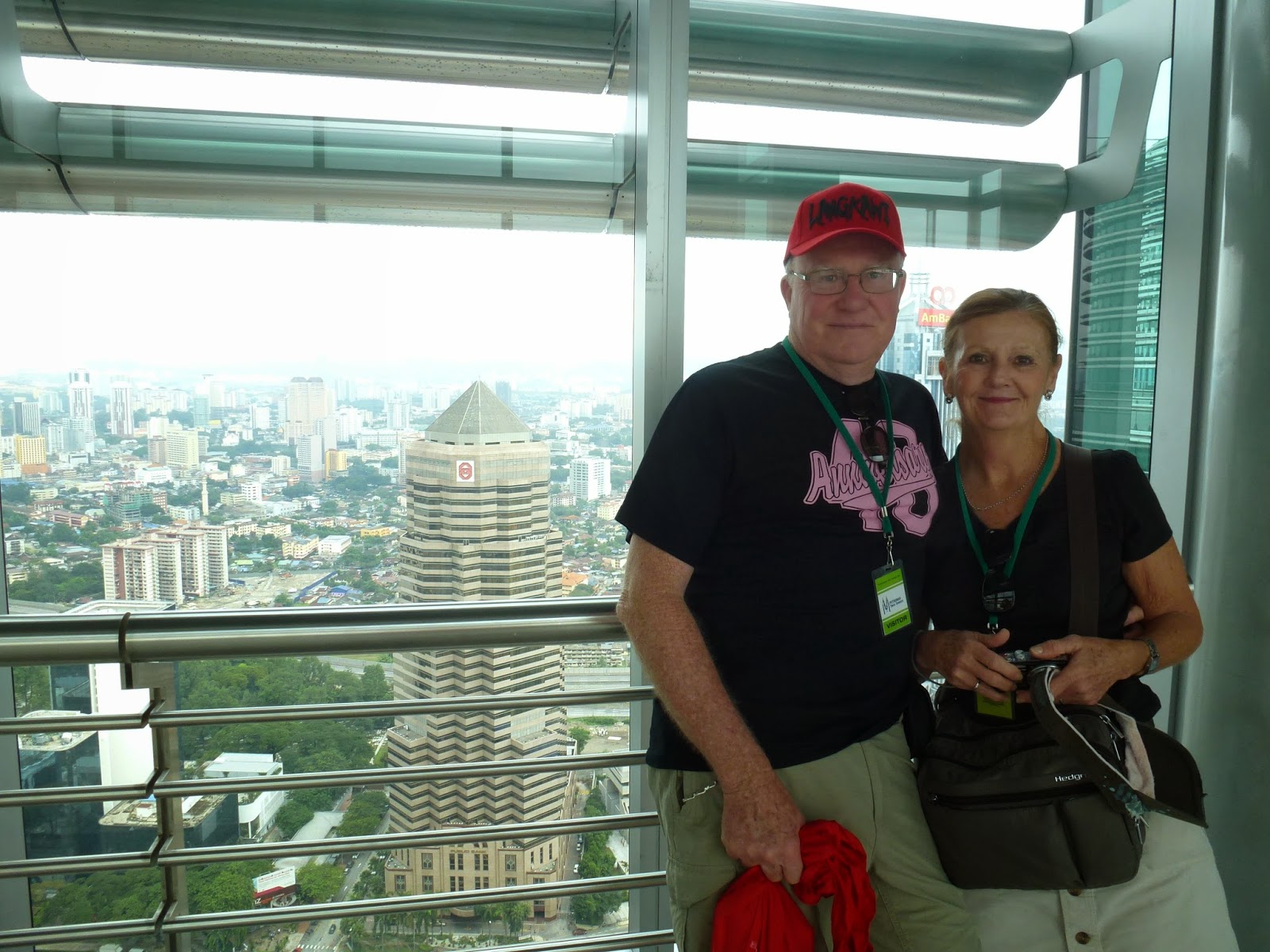 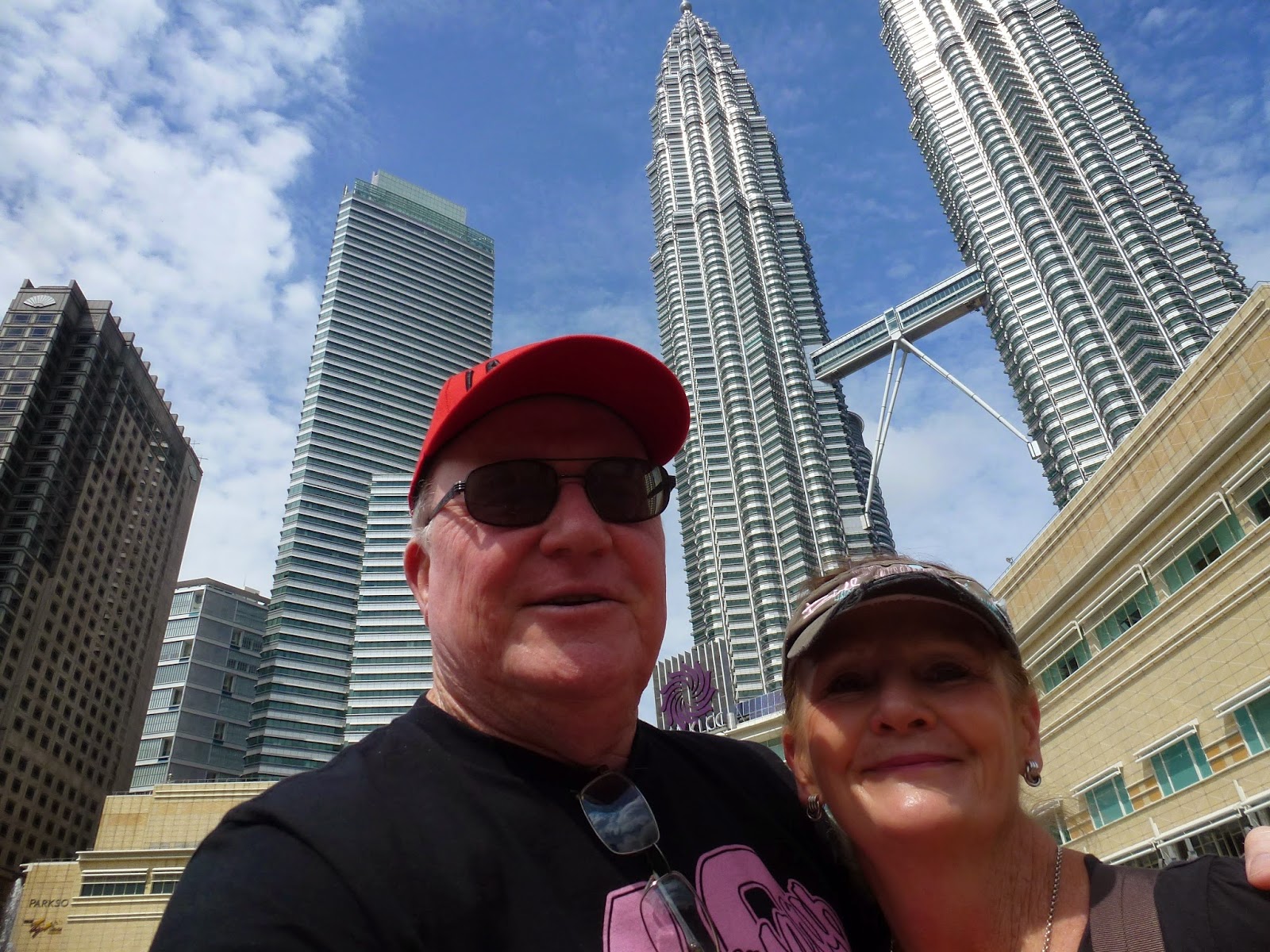 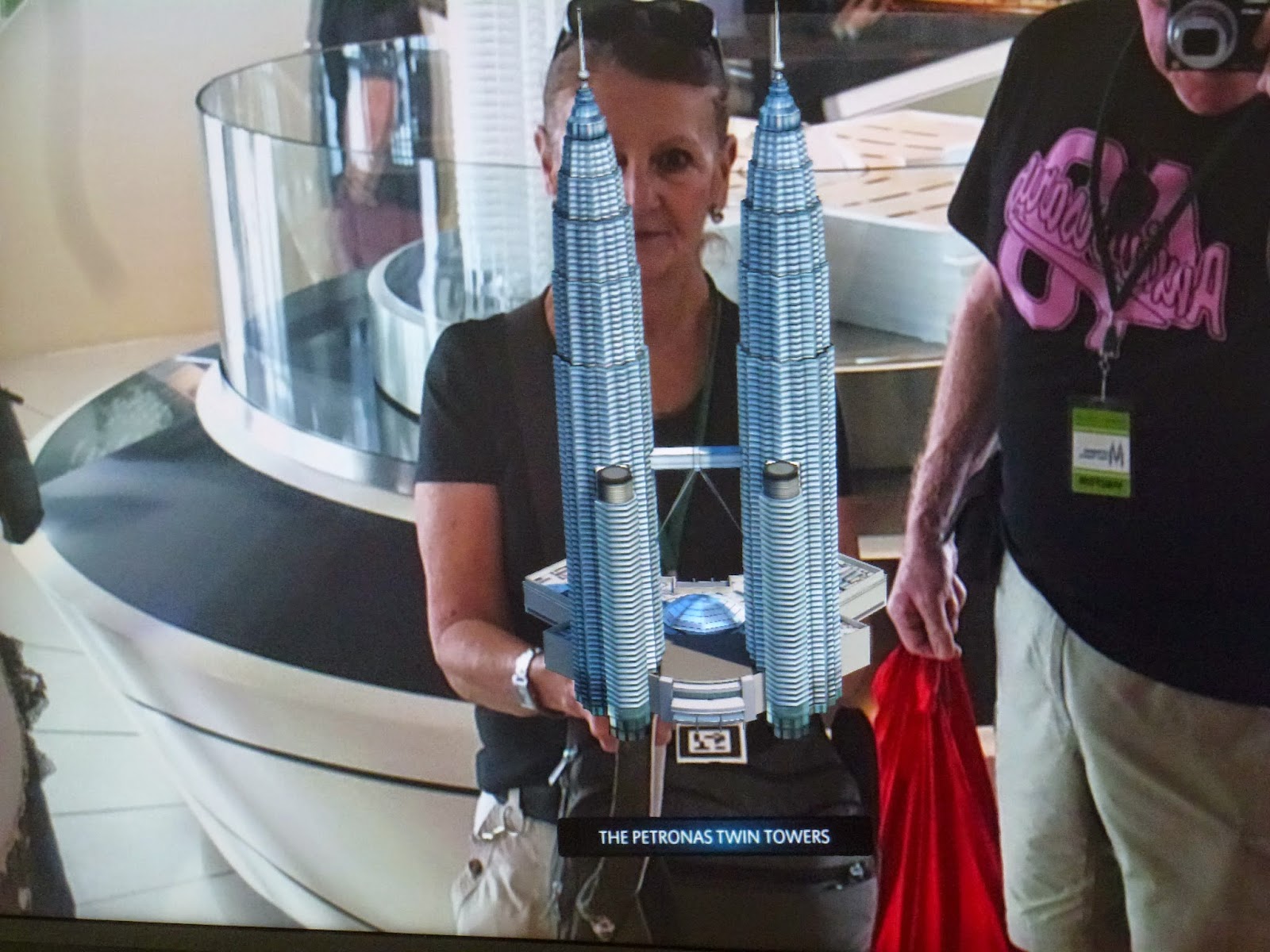 It was an unusually clear and sunny day, so we were rewarded with some spectacular views of the KL skyline.
KL doesn’t have a lot of things to hold our interest and what there is we have seen on previous visits, so we were done and dusted by midday. The fantastic hotel pool called, but an early storm put paid to that so we took in a movie.
Dinner the last couple of nights of our stay was Chinese. We are not great lovers of Indian or Malay cuisine, although there are a few Malay dishes that are ok. But we do draw the line at eating them for breakfast!
With almost a full day to fill before we headed to the airport for our 9:40pm flight, Paul suddenly “discovered” a model train shop way out in the suburbs of KL in Subang Jaya. A trip out to places very rarely visited by tourists is always fun and sometimes a challenge. No problem today though. The amount of English spoken in Malaysia always makes getting about, even in out of the way places, very easy. 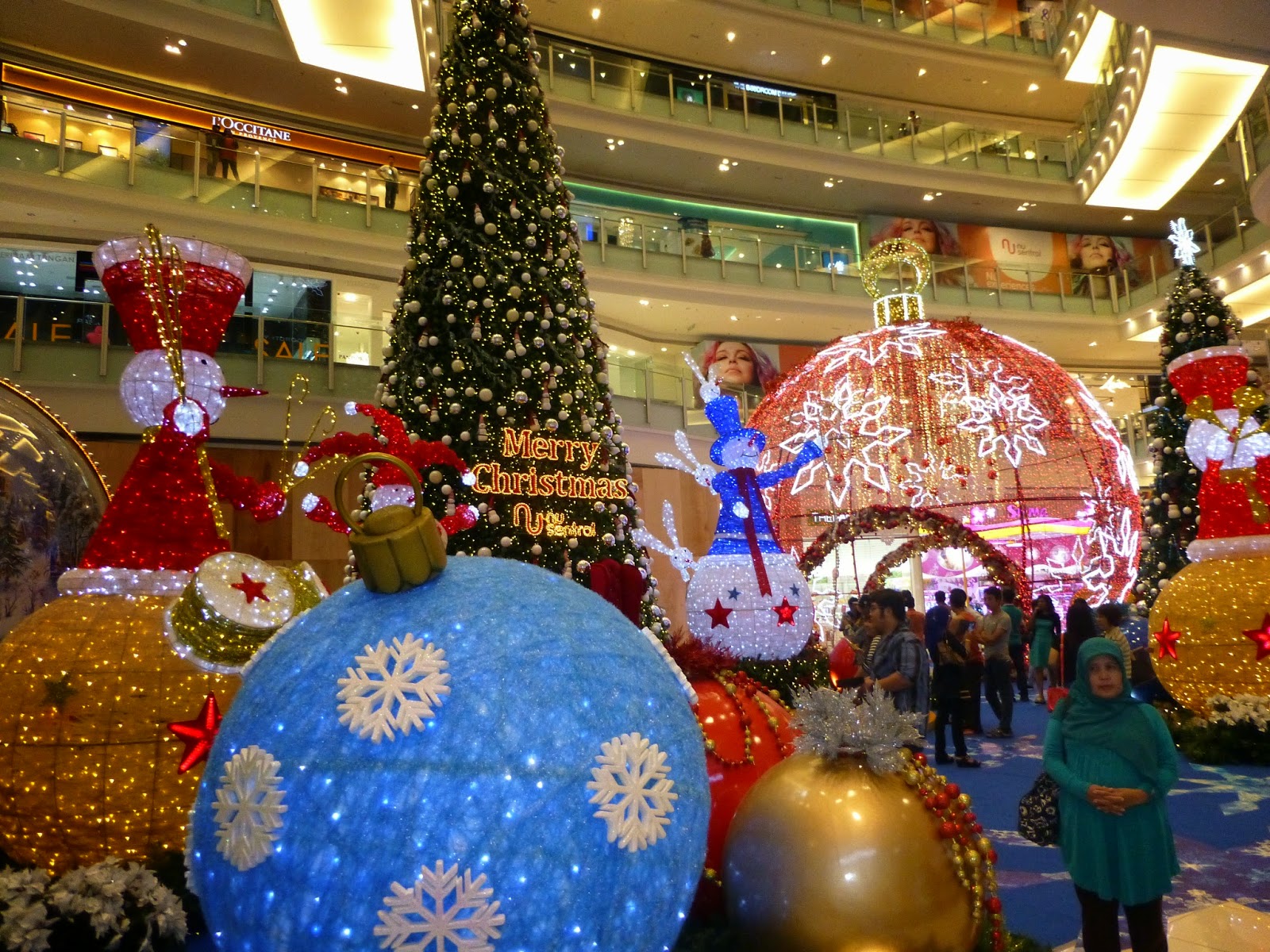 So here we are again in KL Airport, with many hours to fill, waiting for our flight. Bars are fairly well non-existent here so we have to do with extremely expensive beer from a Dome chain café. All will soon be well though, we are travelling Business Class back to Australia with fully reclining seats!

Although we simply can’t afford to fly business class, it is a VERY tempting option. Our 8 hour flight home was made up of a meal an hour or so after take-off, a restful sleep on the fully reclining seats and then, after what seemed just an hour or so, the pilot’s announcement that we would soon be landing in Coolangatta woke us up! Backpacks on, first to the Immigration gates, through the green Customs chute and we were at our car within 15 minutes of hitting the tarmac.
Posted by Paul and Janita at 1:23 AM 1 comment:


23 November
Hotel Sentral, Kuala Lumpur
On our fifth visit to KL we feel like locals. Our favourite cheap digs, the Sentral Hotel, is not the flashest place in the city, but its location, just over the road from Sentral Station, makes for easy transfers, as the station is terminus for both the bus and the express train to and from the airport. A new terminal has replaced the old LCCT, (Low Cost Carrier Terminal), which we used to call the “cattle shed”. The replacement, KLIA2, is enormous and very flash! Most staggering for us is that the whole thing was completed in two years. We transited through KLIA2 just a couple of weeks ago, on the way back from our Trans-Siberian trip. This time the lack of signage only had us confused for a few minutes before we found our way to the Transport Hub and the Skybus into KL. 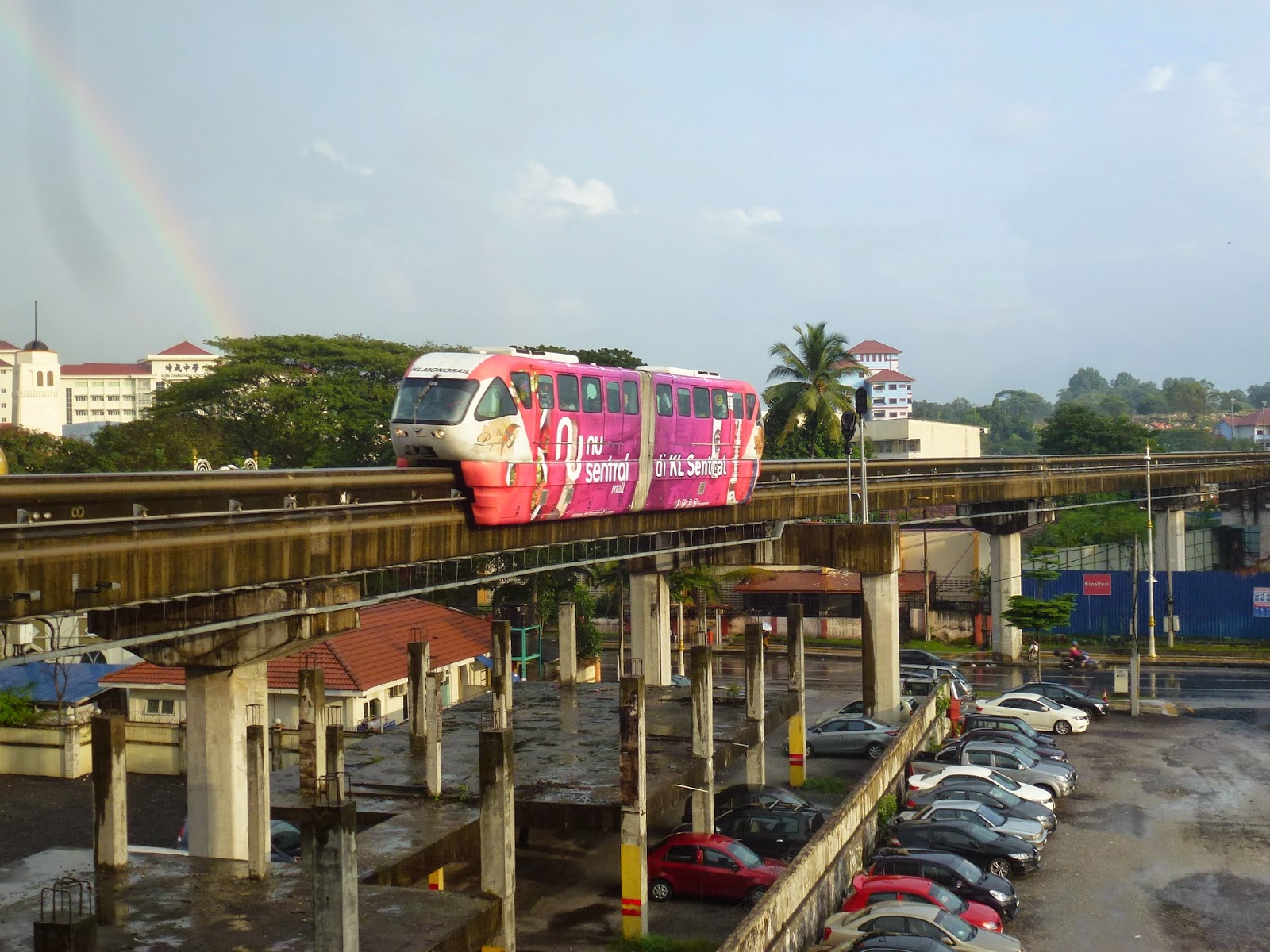 26 November
FaveHotel, Langkawi
Most unusual for Air Asia, our flight was almost an hour late leaving KL this afternoon. By the time we sorted our hire car and drove down the coast to our hotel, the temperature and humidity had hit “tropical” on the comfort scale. Having just returned from two months travelling in Russia, Mongolia and Northern Europe through an unusually cool autumn, we were not well acclimatised to the tropics. Nevertheless, sitting in our hotel room after a late afternoon re-con of the beach, things feel a lot better. We have a view over the rice fields to the jungle-covered mountains, a water buffalo is grazing in the fields, the late afternoon sun is tinting the coconut palms yellow and the air-conditioning is pumping. As well, the beer is flowing and with Langkawi being totally duty free, it is super cheap! 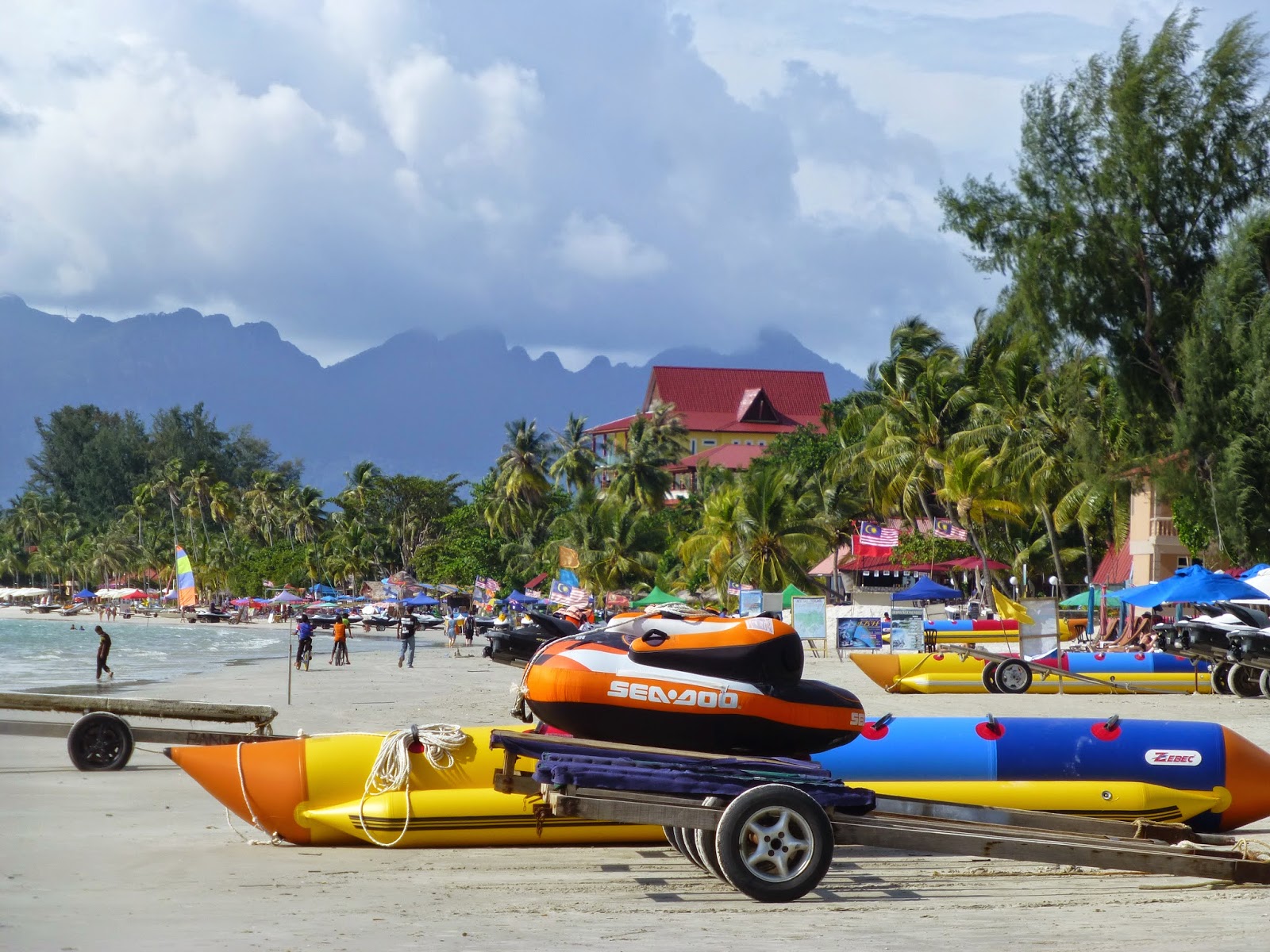 27 November
FaveHotel, Langkawi
You just have to love tropical Asia. Life has a certain rhythm here. Even with all the development that has happened in places like Malaysia, even on resort islands like Langkawi, the rice fields have to be maintained, the water buffalo still need to wallow and graze and the afternoon storm will still roll in just before sunset. We could see the storm coming, but the farmer with the whipper-snipper, cleaning out the mounds between his paddies, couldn’t. Even so, his reaction was immediate, he must have smelt the storm coming. He was on his bike and out of there in seconds. All this we have observed from our hotel window, just off the main coast road, as we sip on a few beers before heading out to find a suitable eatery. 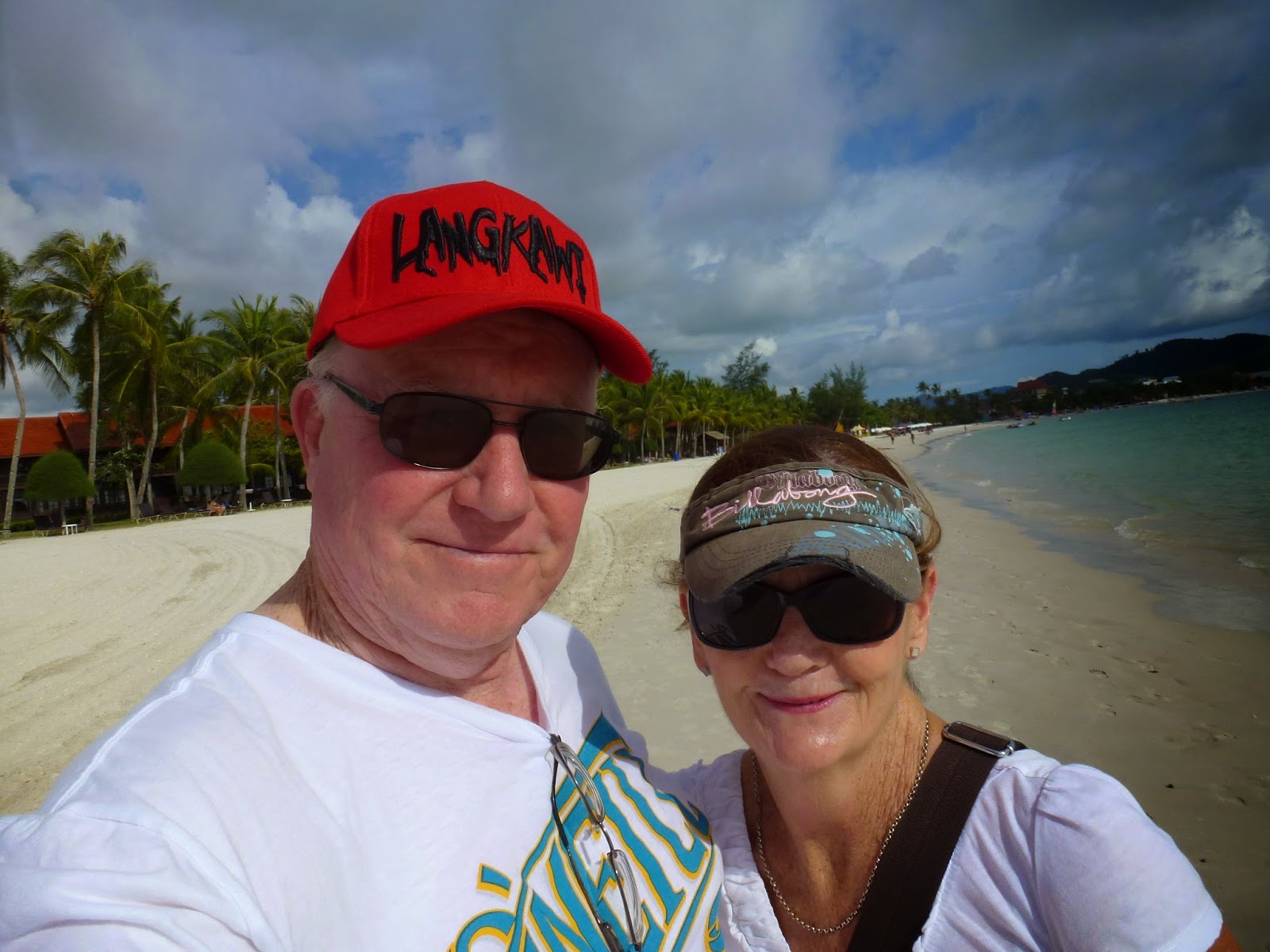 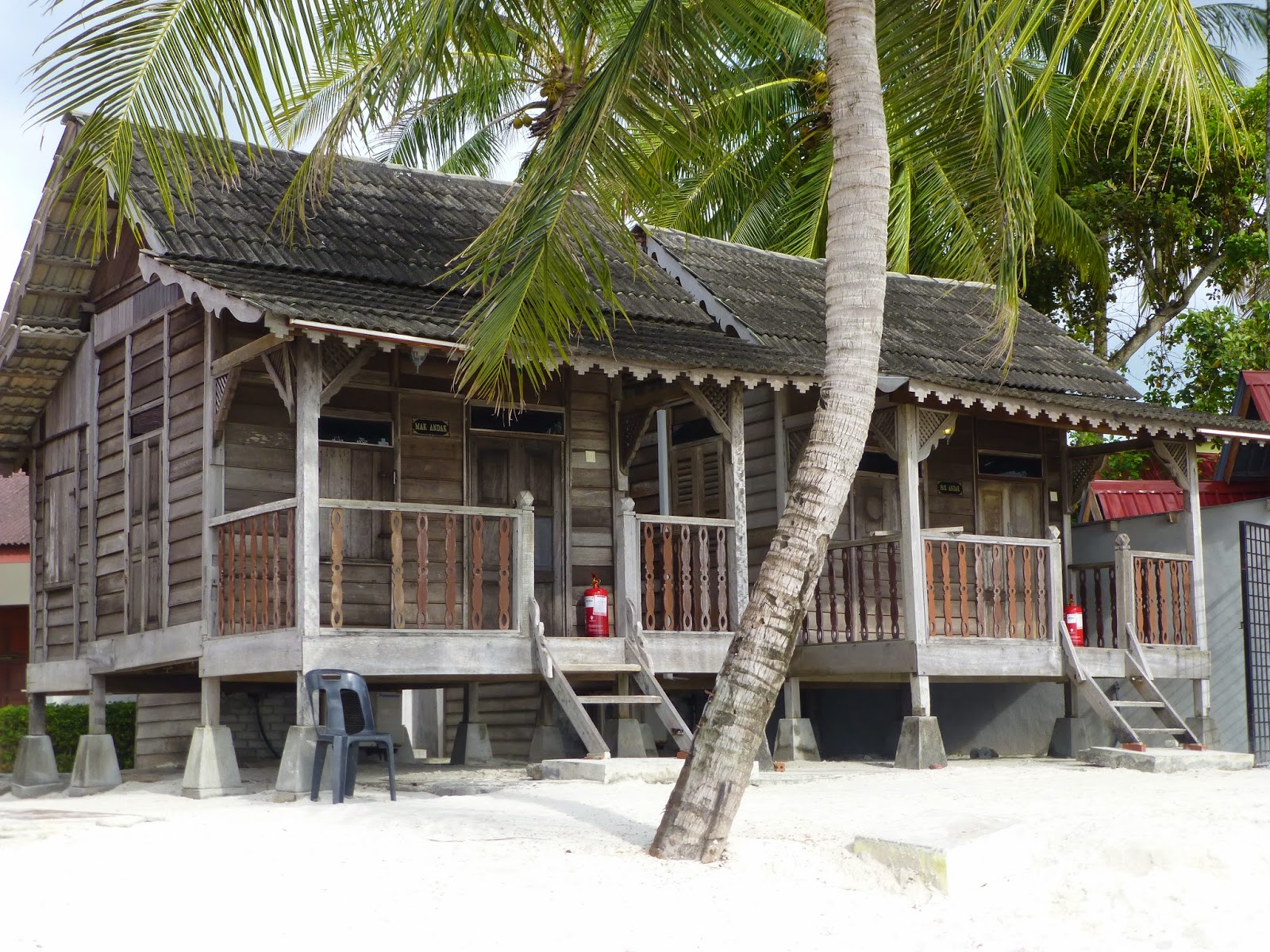 We made a late decision to hire a car here on Langkawi. Good call as it turned out. While we had read that Langkawi was not as crowded as other Asian resort islands, we had been a little reluctant to hire a car. We had driven in Malaysia before with very few problems, so that wasn’t our issue; we just thought we’d be better off in taxis. But, while it is a fairly small island, there is a lot to see, and it is better to have the independence a car provides than wait about for taxis. So, in our Proton chariot, we spent the day hitting some of the local sights and cruising the back roads. The Proton is a Malaysian manufactured vehicle which, from our experience of driving them, is much like an Asian version of the Lada - a bit of a disaster. They drive like a tractor! 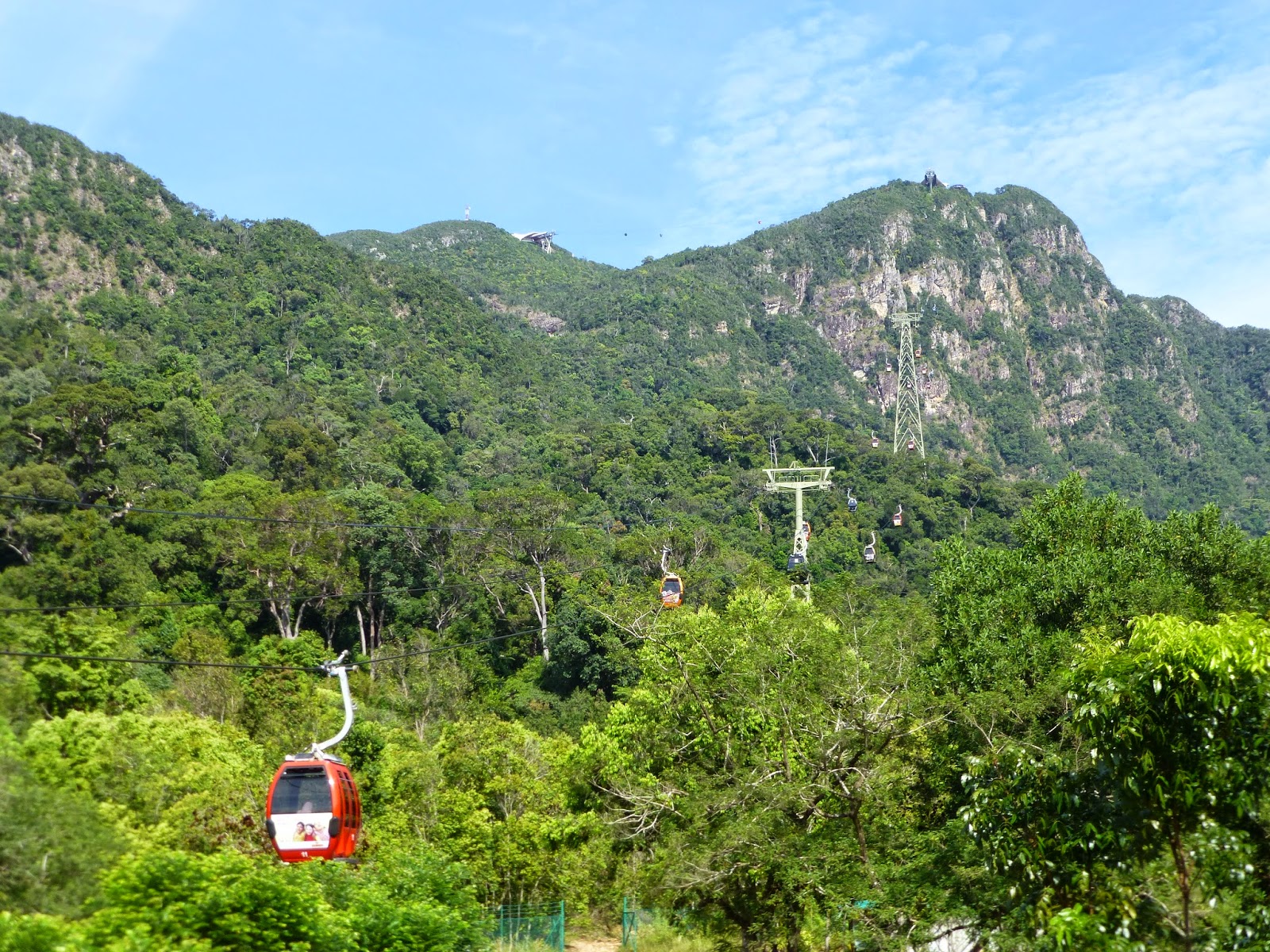 The big hit of the day was the Langkawi Cable Car which is the longest of its type in the world, hauling us to a spectacular view point above the island on a near-perfect day.
A late swim off Cenang Beach and a cleansing dip in the hotel pool closed our day. 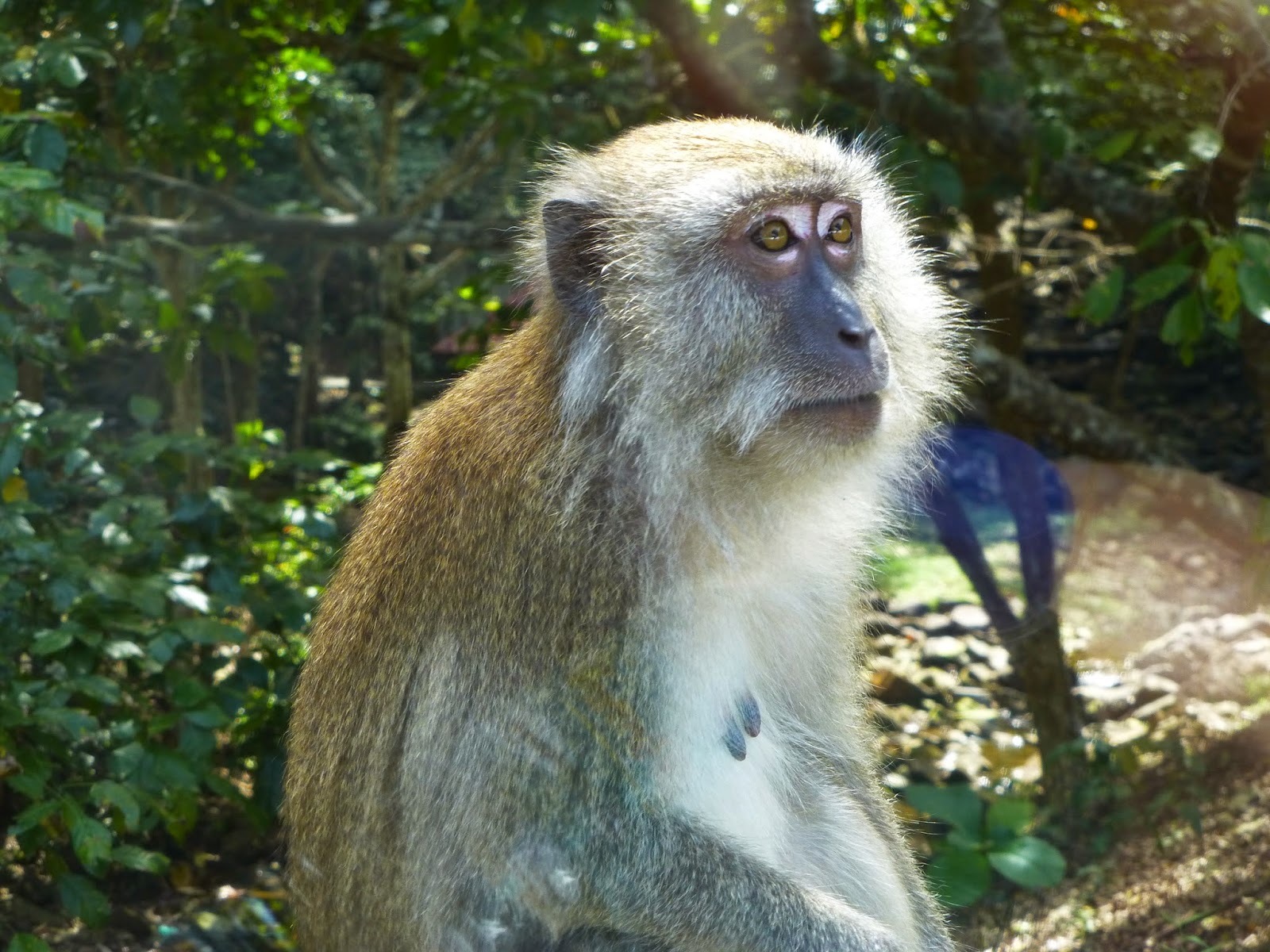 28 November
FaveHotel, Langkawi
Right on cue, the 5:00pm storm drove us from the pool. The buffalo didn’t blink, but the farmer was probably Muslim and still at Friday prayers.
As we have probably said before, we are not resort people. So our choice of lodgings here was just a nice hotel, a little back from the beach, but close to the main trading street of Cenang. Most of the resorts cut you off from the local traders and restaurants, preferring to lock guests into their own closeted, over-priced world. The Fave Hotel was a good choice from this point of view. With the luxury of a car, we have been able to enjoy some of the local lifestyle as well as the beaches and the tourist strip along the beach front.
Today we completed our exploration of the island, dragging our poor little Proton up the winding 12 kms to the top of Gunung Raya, the highest point on the island. The view was fantastic, even with the few scuds of clouds that shrouded some of the coast. 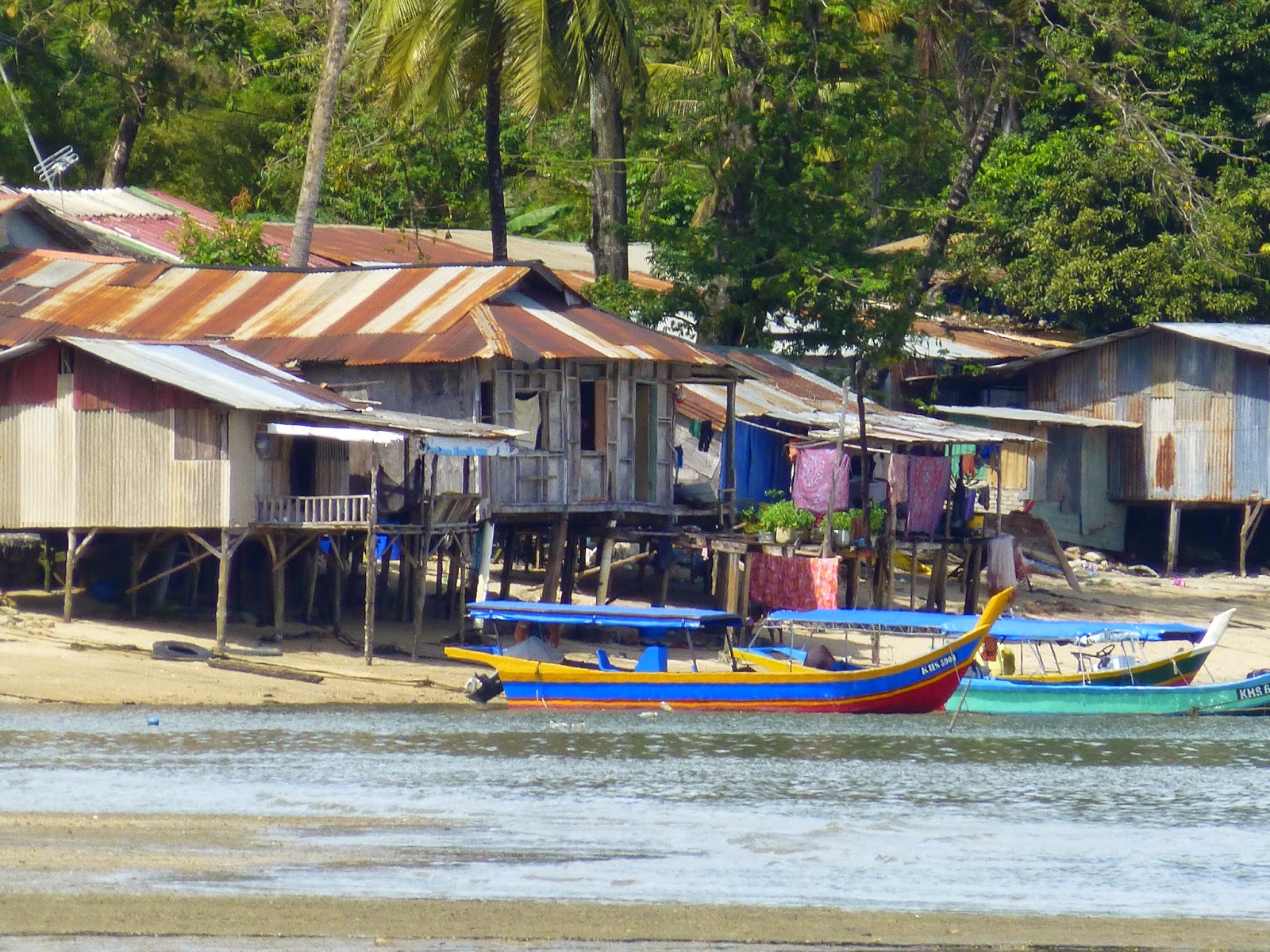 Heading to Kuah, the main town on the island for lunch, we made a quick stop at a small fishing village which, despite all the development around it, still looked like the real deal. Kuah itself is a bustling port with a couple of very popular shopping malls. The traffic in the centre of town was a little hectic, so we grabbed a nice lunch at a little café and headed back to Cenang for our afternoon swim. The call to Friday prayers lightened the traffic as the dozens of mosques on the island drew in the faithful, men only of course.
A soothing Tiger at a bar on the beach and our day was done.
Posted by Paul and Janita at 3:35 PM No comments:

Paul and Janita
We are a couple of 'middle aged' (well at least one of us admits to being middle aged) retired Australians who are now living 'gracefully' enjoying our family and travelling as much as we can. We live in the sub-tropics, so the summer at home is HELL so we seek out cooler parts of the world during the southern hemisphere summer. Guess that makes us the opposite of 'snow birds'? See some of our other travels at: www.brisbanecornershop.com